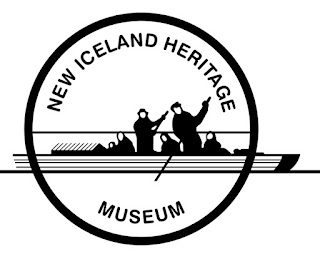 Life and art continue to merge in the hectic schedule for Articulation Textile Group as they prepare work for their third group show together in the past eight months. For some of us it is the fourth or fifth exhibition we have been a part of in that short span of time. I will share a little about independent events in a future post as for right now lets just focus on the most pressing issue at hand. I don't know about you but I am getting pretty dizzy juggling life and art, and yes, I am guilty of dropping those balls on occasion too despite my best laid plans. For the skimmers amongst us, we hope you will join us during the duration of the show, 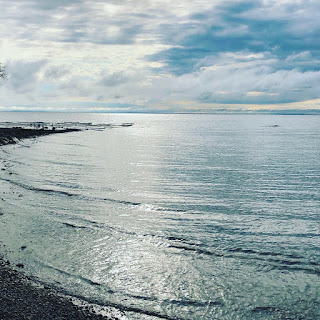 Just down from the Gimli Glider
Nihm@mymts.net for more museum information


This past weekend Ingrid and I, both cottagers at Ponemah on Lake Winnipeg and the Manitoba representatives for Articulation, took the short drive in to Gimli and the New Iceland Heritage Museum, to review our current plans for the gallery space. Counting out linear wall space and connecting the list of items we are aware of in transit against gallery footage within the space allotted to us was the first order of business. We do have a grand plan but we all know what can happen with that. We will wait to see what pans out when all the work arrives and it can be assembled in one communal destination. Some of us, and I won't mention any names, but its probably a local and Ingrid was organized months ago, are still stitching up a storm readying work for photography. I know my pieces will be in the space on the day we hang the show so all will be well and I like every other member of our team will celebrate the culmination of our communal creative efforts.

Yesterday I spent the day working on the write ups for my work to share with the group.  While visiting google docs, reluctantly, it was exciting to read about what is coming in. I am really looking forward to seeing who has finished what pieces and how they resolved a particular structural or technical issue that presented itself along the way. Unwrapping shipped artwork is a cross between christmas morning and being a kid in a candy store, both of which inspire joy and often great respect for the talented women we share space with in this group.

Making art is all about problem solving. Some of the hurdles we are faced with cause us to discover new and wondrous things while others inspire an about turn resulting in an abandoned idea that may or may not surface again after future consideration. I personally abandoned one body of work for this project with a focus on language. Time and circumstance can also be another reason a piece is abandoned despite its visual potential to be a star within a group exhibit.


The Icelandic community has a particular affinity for the written word, language development, poetry and legendary tales. Being an immigrant myself, I am well aware the words of those new to a land can be lost or misunderstood. My first project intended to look at the concept of translation, specifically, the reinterpretation of the famed Icelandic sweater into a quilted piece. The idea of transferring knowledge in one realm to be reinterpreted in another was an interesting prospect initially but in reality the construction stage felt too far removed from my current studio practice and so it has been parcelled away for another day. Who knows, I might unearth those beginnings during a studio clean up in the future and be inspired to reinterpret those concepts in another format at another time. Such is the business of creation.


Donna Clement in her piece "Vinarterta", focused on language and an Icelandic cultural food item, specific to the Interlake region. Writing and drawing with procion dyes, Donna celebrated this delicious, local treat. "Vinarterta" is made from alternating layers of spice infused plum jam and almond or cardamon flavoured shortbread. While little is known of this cake in Iceland today, the immigrant community in North America holds tightly to this culinary time capsule and cultural touchstone of their home country." ( Donna Clement) I am lucky to have a friend with Icelandic heritage who gifts me with cake annually at Christmas. My family is definitely grateful for that Icelandic connection.


Look for "Vinarterta" at the entry to our gallery space and buy yourself some from the museum giftshop courtesy of a local bakery on your way home.

Gimli is a thriving summer destination in Manitoba's Interlake region. Locals love their municipality year round. At just over an hour beyond Winnipeg's perimeter, Gimli is an easy commute and a scenic drive from the action of international culture that is Manitoba's capital. At home on the foreshores of Lake Winnipeg, this thriving, creative community retains the Icelandic flavour of New Iceland, Vestur Islendingar, the region that became home to a flood of Icelandic immigrants after 1875 when almost one-fifth of the population left Iceland. Granted Reserve status the Icelandic settlement self-governed until 1887 when they were incorporated into Manitoba and all Icelandic descendants became Canadian citizens.


Articulation textile group members visited the region in 2016 to gather stories, information, visual imagery and inspiration. This research mission evolved into individual responses to the region that each artist has interpreted using textiles as the primary medium. Each of us is unique in our process, our interpretation and preferred methods of creation which makes the coming together of a body of work undertaken within these parameters all the more interesting.


Personally, textiles take me back to community, to the idea of women supporting each other in the human facets of their lives. A place where the rhythm of stitch adds a meditative quality, a doing that promotes being. The quilt is a symbol of comfort that is both utilitarian and aesthetic. It shields and protects, it warms us with its presence and intent. The quilt, often made in the community, is where I focused my creative efforts for the body of work I call the "Larettur Series" (Icelandic for horizontal) These quilts are reflective of a community in a new land who look forward to new beginnings while not losing sight of the connection to their origins.

Stephan G Stephansson, (1853-1927), in the first four lines of his poem, "Remembrance", translated into English,  in "The Anthology of Icelandic Poetry", aptly defines the immigrant sentiment.

"Though you have trodden in travel,
All the wide tracts of the earth,
Beware yet the dreams of your bosom,
Back to the land of your birth,..."

My contribution, the "Larettur" work, focuses on the commonality of the horizon, where the expanse of water and sky converge. The horizon, like a punctuation mark, defines the boundary between what once was and what now is, for wherever one stands, near or far, one can always rest their gaze on that horizon and be home. 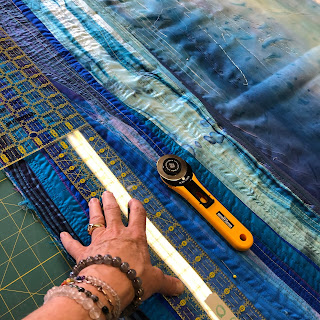 Production of this group was not without issue. My original plan for three large pieces morphed into a series of six, four of them taking on a narrow horizontal shape and bound as quilts. Tapping into the Icelandic spirit for adventure and expansion I opted to not confine the largest pieces within a quilt binding but instead to mount them on canvas and allow the image to be free. The rotary cutter came into play, possibly too often, as I wrestled with composition and intent. The work, as it sometimes does, took on a life of its own and that is one of the inspiring aspects of an artistic practice. We may as artists think we are in control but sometimes, often, a body of work evolves into something we don't anticipate and teaches us new lessons along the way. 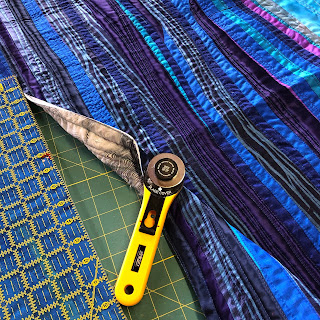 I learned patience and a new respect for the quilter who feels an almost completed quilt should not be slashed by a rotary cutter, not once, and definitely not multiple times. That is probably also why I am still scrambling to put down the needle and thread and have the pieces photographed at the last minute before their inclusion in the show.
Evaluating our process at the conclusion of a single artwork or at the completion of a series is another step an artist takes before work is included in an exhibition. As our current deadline looms and plans come to fruition, we need to take some time to encapsulate our thoughts, our process and the end result of our journey through ideas, inspiration and media. What to name our pieces becomes another decision to make that can be an important connection to our work, our audience, and our group focus or theme.

My thoughts returned to that concept of translation and the realization my computer does not speak Icelandic with its keyboard omission of characters unique to the Icelandic language. Naming my pieces with bilingual titles felt like an appropriate Canadian thing to do. Being of neither Icelandic or Canadian descent I do appreciate the immigrant affinity for duality and the need for a second voice in support of the first.

I love words and spent some time googling definitions to help me in my quest to appropriately name my works with titles that spoke to both parts of an Icelandic immigrants heart. Along those travels, I came across Merriam Webster's definition of Articulation, which she defines as the act of giving utterance or expression. I think you will be as surprised by the diversity of expression found in Articulation's Show, "Connected Heritage", as I am. We hope if you are in the region you will come out to see our work in person, that you might join us to share your stories of the Interlake or to discuss the ideas of connection, community, and creativity, either in person or in our guestbook.


See you in July for the next blog post!
Amanda Onchulenko 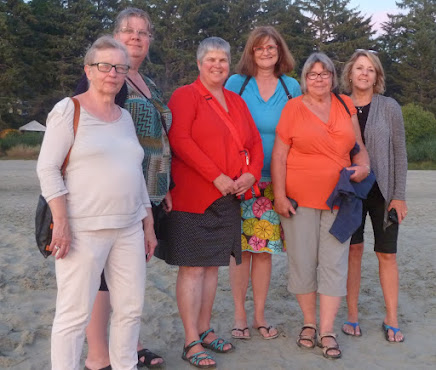 2019, March 26 - April 18
'Forest and Sea and the Place Between' Portals Gallery, Duncan, British Columbia, located in the lobby of the Island Savings Recreational Centre. Some of the body of work resulting from 2 West Coast Rainforest Study Sessions.
Artist reception April 13 from 3-5 pm.